Fighting games; the genre that pits you and a friend against each other in a battle of physicality… with no physicality.  A catharsis for disagreement among brothers, and for the ever-so-stressful elements of life.

Something to clarify right now; I am an old school fighting gamer.  No, that doesn’t mean I think Street Fighter II is the greatest game ever.  What it means is that I am overwhelmingly against the online experience.  These games are meant to be played with your opponent right next to you, dangerously within reach.  Even my wife agrees with that.  As a fighting game enthusiast, I enjoyed immersive stories, fun, relatable, and varied character designs, and fun gameplay!

This game series is well-known for being one of the most beautiful 3D fighters of all time, with the latest one being the best.  With a fun but difficult counter system, varying character designs, free movement and interactive levels, this hard-hitting title is great fun with another person.

That being said, the game has a free-to-play mode and tries to sell DLC to you like pans and pickaxes during the Gold Rush.  The single player experience is pretty abysmal as well.  This game is all about hitting hard and having a person to play with. 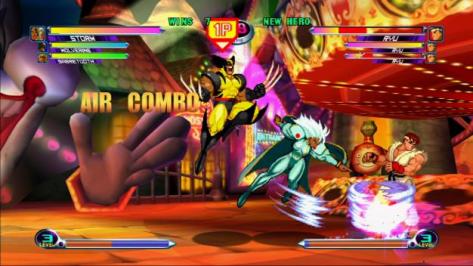 A wonderful, fast-paced, frustrating cluster of Marvel and Capcom characters fighting each other and holding to a story that’s almost nowhere to be seen until the little slideshow endings.  If you have a Marvel or Capcom fan with you, bring him out and play until you can’t keep your eyes open.  This game was horribly imbalanced, with broken characters and cheat moves.  Nobody in my family cared.

This game is fun, fast-paced, and hard-hitting, with the caveat that it takes itself maybe a little bit too seriously.  The absence of a tag mode is almost unforgivable, but the copious amounts of costumes and such involved make this a fun game of escapism and beatdowns.  The block button from its Mortal Kombat predecessors is GONE, and the speed of gameplay definitely reflects that change.  This game also possesses a long story mode, and has plenty of replay value. 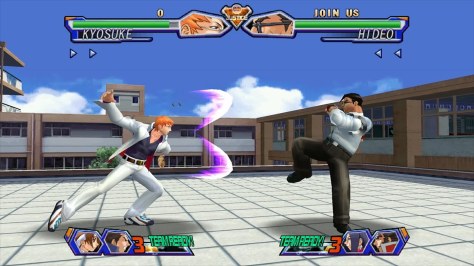 I grew up playing the Japanese version of this game, so it took a while before we realized what we were playing; the most awesome fighting game Capcom has ever created.  This game is so fun that writing about it makes me want to play it.  If a remake came out on the PSN I’d snap it up.  I pray that Capcom makes a sequel, and I pray that they don’t ruin it.

This game was great because of the variety of co-op moves, the fun “high school” setting, and the really neat character designs.  Batsu, Burning Batsu, Wild Daigo, Nagare, Hideo, Hayate, Roy Bromwell, Boman… I was always really surprised that this wasn’t based on a successful anime.

The music is ridiculously catchy in this game as well:

This is the game with Hayato.  Favorites from this game between my brother and me were Bilstein himself, Hayato, Shaker, Gamof, Rai-on, Byakko, and Zelkin.  Really fun character designs.  Also, each character has about 3 possible endings.

For when we were in a seriously old school mood.  Every fighter is like playing a different game in this one, kind of like the Guilty Gear or BlazeBlue series.

There was an error retrieving images from Instagram. An attempt will be remade in a few minutes.

Every subject has its Phans.

When is it a bad idea to give the poor free stuff?

The Illustrated Man – The Other Foot